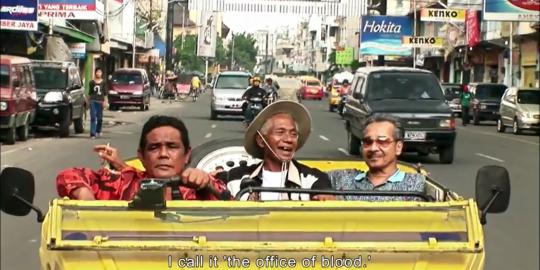 The Act of Killing shows the vibrant, happy current lives of former mafia and military enforcers responsible for thousands of murders. This juxtaposition with their reenactments of the murders incites a surreal sense of irony and outrage in the audience. (Image from Paste Magazine)

Genocide is a hard topic to portray, partially because it is such a brutally violent subject and partially because nobody who did not live through it can understand exactly what it was like. However hard historians and writers have tried to explain it, it takes a filmmaker to show it for the full weight of the event to hit someone, as is the case with The Act of Killing and Night and Fog. Both films characterize how genocide is normalized when condoned by society conforming to government expectations. They emphasize the typicality that the holocaust and the Indonesian coup became to the people who lived through them. In The Act of Killing, it is the depiction of these mass murderers living normal, happy lives which shakes us as the audience; in Night and Fog, it is the colorful, vibrant yet distancing shots of the concentration camps as they exist today (meaning as they existed when the film was made) that draws the holocaust out of a grainy black-and-white world into the clear and vivid world of here and now. The two films take different approaches in how they tell the story, however: Night and Fog shows the images without giving voice to the perpetrators, whereas The Act of Killing does the exact opposite, hearing the story from the perpetrators only without showing any actual portrayal of the events except as the perpetrators themselves recreated them.

While these two documentaries portray different events in different parts of the world using different techniques, they both fall under the definition of “prosecutor” as described by Erik Barnouw. Before and during World War II, “bugler” documentary was used to proclaim the means and methods of war – a bugler going before the troops, so to speak, rallying the people and striking fear in the enemy. All sides of the war, Allied and Axis, used the same methods of propaganda to further their agenda in the war, and this created the first time that a war was so well visually documented since both sides filmed so much of their work.

Frank Capra’s Why We Fight documentary series is the epitome of American bugler documentary, telling why the United States was necessary in the outcome of the Nazi advance, using footage of recent events.

After the war, documentaries focused for many years on making sense of what happened – it was hard to fathom just what the war meant, and what its impact was and would be. It was also used to condemn the crimes committed – hence the term “prosecutor.” Before the war, it was present-tense documentary, filming events as they happened. After, it was past-tense, taking the footage from other filmmakers and piecing it together to form a story. That is where both The Act of Killing and Night and Fog fit in – they are portraying events of the past after the fact. At the same time, another difference between the two films becomes apparent: The Act of Killing does not condemn anybody; the condemnation comes from the participants themselves, whereas Night and Fog places blame with the scalding question, “Who is responsible?” as images of the concentration camp staff move across the screen.